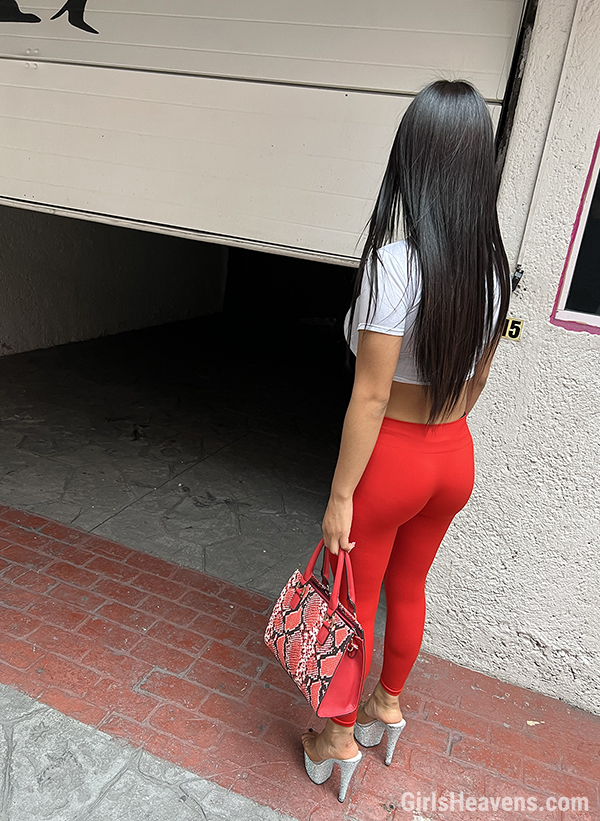 Bogota is a very adventurous city when it comes to meeting girls for sex, and I wouldn’t have it any other way. The city is already unique enough, but add in the mongering aspect, and it’s truly an experience each and every time.

Make no mistake about it; the girls here are gorgeous, and you can have a great time without spending that much money if you meet them on the dating site.

The enthusiasm that many non-pro Colombian girls have certainly carries over to the hookers. GFE’s are easy to come by, and it doesn’t take long to rack up plenty of contacts with girls that you have been with, whether it’s in a brothel, a strip club, or even a massage girl.

There are numerous sex options found all throughout Bogota, but I’ve narrowed it down to the best to make things a bit easier during your stay. This is obviously not an exhaustive list, but you could stick with these for your entire trip and be more than happy.

The Red Light District in Bogota 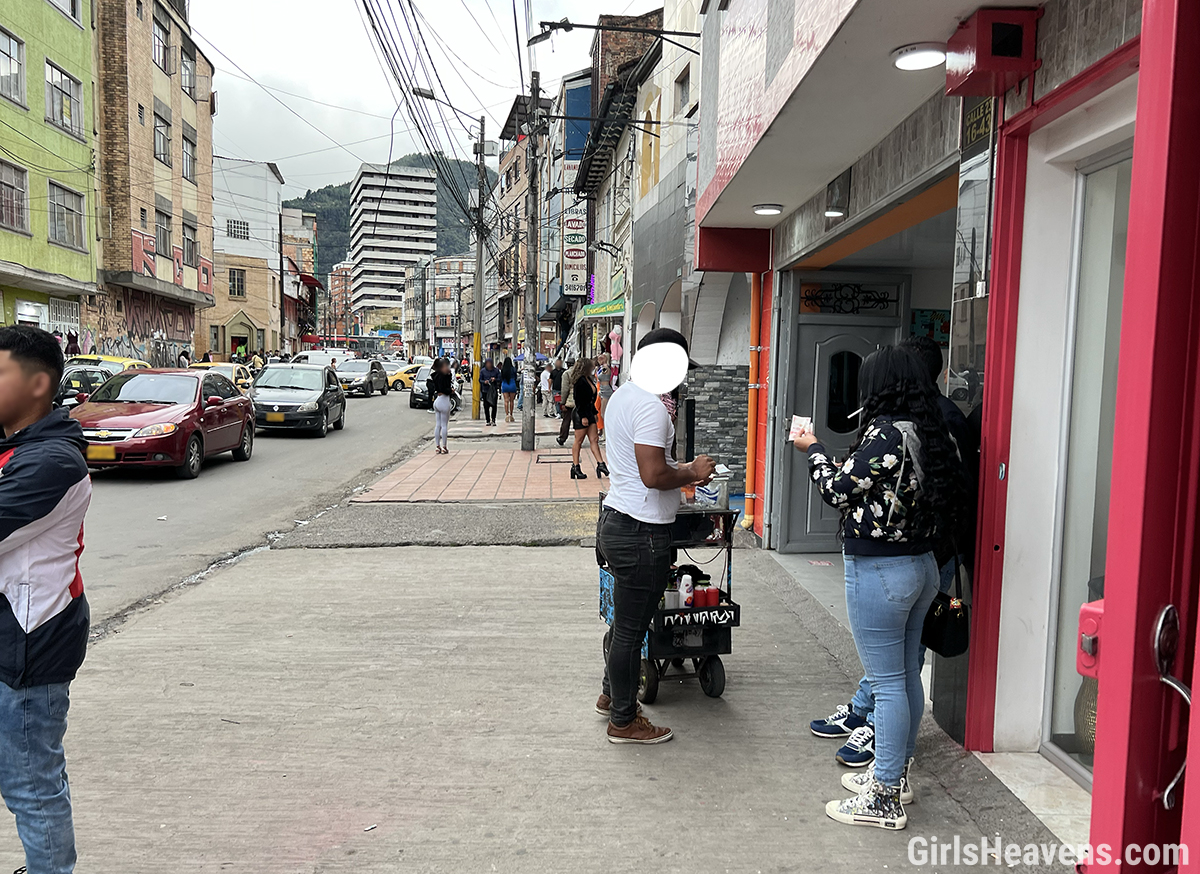 The city of Bogota has taken an Amsterdam approach when it comes to prostitution, designating an entire area downtown as a sort of Red Light District, where prostitution is fully legal, and basically anything goes.

This district has a few names, including Santa Fe, and “The Tolerance Zone”. As you can imagine, this area can be a bit crazy and dangerous, but if you are careful of your surroundings, and avoid hanging around late at night (unless you’re with a group), you’ll be just fine. In fact, you’ll have a great time, and for so cheap.

The Tolerance Zone is the area around Calle 23, between Calle 24 and Calle 19. If you use the TransMilenio to get around, get off at Calle 22, South Exit (only 2 exits), and then walk to the west, keeping the Montserrat Mountain on your back, go towards Carreras 15, 16 and 16a.

Or, do it like I do, and stay at the famous Hotel Tequendama, which is only 700 meters or 10 minutes walk away from the Santa Fe red light district.

The center of all the action is the Calle 23 / Carrera 16 intersection (red pin on the map above). You can walk several blocks around here and will find dozens and dozens lightly dressed Latina ladies with amazing asses.

It’s kind of exciting and weird at the same time, as the temperatures aren’t usually suitable for what they are wearing, but they really try hard to seduce you to go inside the building where they have rooms for some quick but naughty sex. Oh, and if you ask these prostitutes where they are from, it’s not uncommon that they say Venezuela.

There are 2 types of businesses in Santa Fe: strip clubs and straight-up brothels.

The brothels are by far the most prevalent type, they are the buildings you can see in the picture where the ladies stand in front of. The way it works is very simple: You pay 50k or 60k to your lady, and follow her to the room that is usually equipped with a shower, bed and mirror on the wall.

She’ll have a condom ready and you have 30 minutes to work on her gorgeous butt. 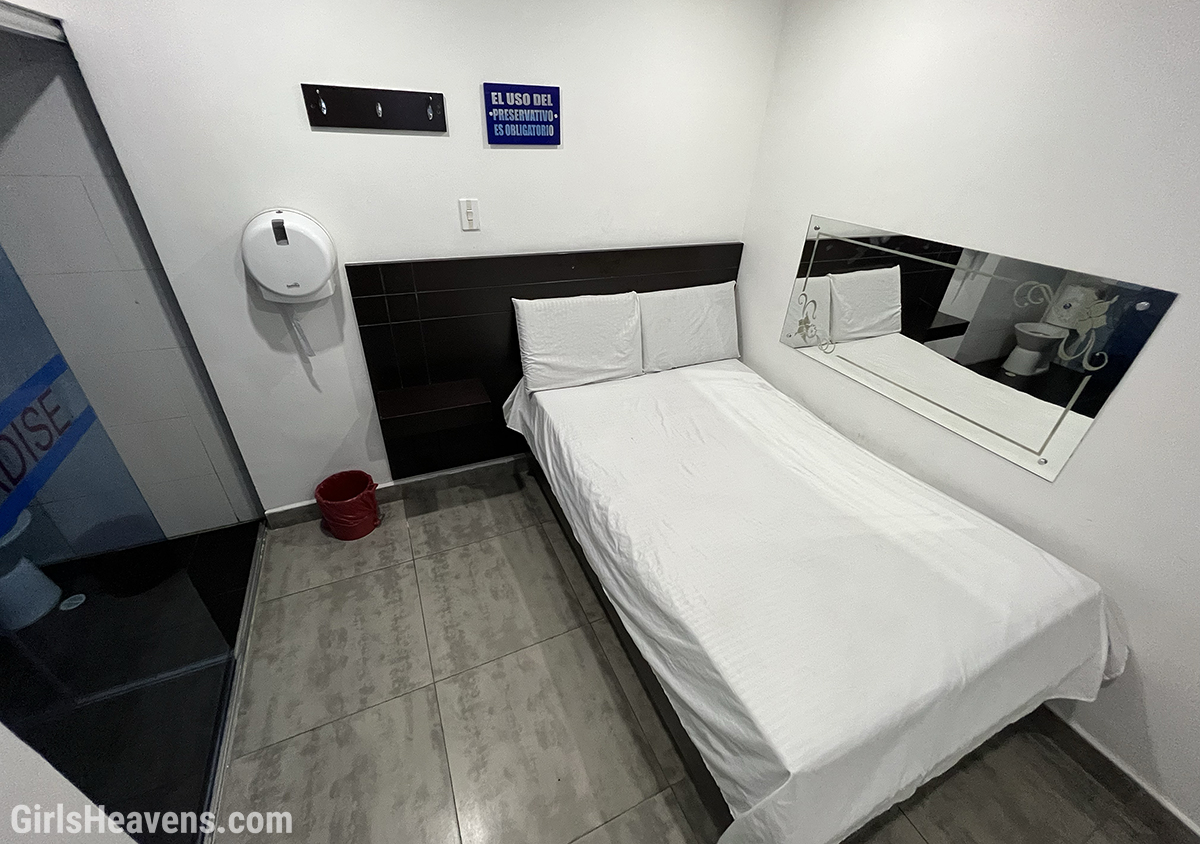 And the strip clubs are fun to hang out at for a while, watch the ladies dancing, have one of them sit and drink with you, and eventually take her to a room in the same building to bang (80k to 100k is the common price here).

A few things to keep in mind. I just want to stress one more time to not stick around here late at night unless you have at least 3 people with you. If you’re in a group, you’ll be left alone, but if not, you may be approached by some unstable people. Also, be sure to not dress flashy, and carry around a lot of cash. Keep your phone put up too, and never leave your drink unattended if you’re by yourself, as there seems to be an issue with dudes getting drugged and robbed of their belongings from time to time. And, you may want to avoid the southern part of Carrera 16, as it’s the prime spot for travesti prostitutes (unless you are into them, of course).

Now that we’ve got that out of the way, here are some of the best brothels / sex massages to check out while you’re in Bogota.

(Note: El Castillo was probably the most popular strip club in the district, but it was unfortunately shut down in February by local authorities for mafia connections.)

Paisas is one of the newer brothels that’s gaining notoriety fairly quickly. No entrance fee (like in the other strip clubs), just buy a drink and take a seat (it’s 20k for pretty much everything, including bottled water).

There are usually around 20 chicas working, and plenty more on the weekend, but not enough for a good guy/gal ratio. So, your best bet is to come by early during the week, and expect to pay 90,000 COP for a 30 minute sex session.

Troya is right next to Paisas, and is one of the most established sex clubs in Bogota.

You can find a massive amount of girls here on the weekend, especially on Saturdays, where the girls will outnumber the guys 2-to-1. The selection is surprisingly good, and the chicas (many of them Venezuelan) here really seem to enjoy what they’re doing. Catch one of the girls dancing on the large stage and you’ll see what I mean, lots of enthusiasm. Prices are just about the same like in Paisas (80k for 30 minutes sex upstairs), a private dance in the corner is 30k, lady drinks cost 30k as well (she receives 20k) but your own drinks are surprisingly cheaper (10k for a beer).

I personally like Troya better than Paisas, the music is not as loud, it’s modern, cosy and they even got a big screen with live sports. Really fun place.

Other Brothels / Strip Clubs in Bogota

As with most South American countries, brothels aren’t just delegated to the more risque areas. They are all over Bogota, except maybe in the nicer parts in the northern area of the city.

Whether it’s a brothel or a strip club, things work the same. You can pay for the girl and get a room somewhere on the property, or pay a higher fee to take her back to your place. In most cases, you’re better off getting a room on the premises, but if you want her for longer, you’ll need to bring her back with you and pay the exit fee.

Definitely a top choice. Lido is one of the nicest and most secure brothels in Bogota, and there are usually lots of off-duty cops around as well, keeping everything safe. It looks small on the outside, but it’s much bigger than you’d think. There are around 60 girls on a busy night Thursday through Sunday, and maybe half that during the week.

Prices start at around 300,000 COP for a quick sex session, but you may be able to talk the girl down lower. Drinks are pretty expensive, and a beer can cost around 30,000 COP. Kind of ridiculous, but that’s how it goes in the nicer brothels. Expect to pay a 100,000 COP exit fee to take her to your hotel for sex.

Hard not to laugh at the name, but you won’t be laughing at the quality of the small selection of senoritas here. You may find as little as 8-10 girls here on a weekday, but they are all top notch for the most part. Obviously, there are more on the weekends, around 20-30 maybe.

This is literally across the street from Pussy’s House, and has even less girls. The prices are a little cheaper as well, but it’s worth checking out to see if you’ve come by on one of the better days talent-wise.

Sex massages in Bogota all tend to follow the same system. You pay for the one-hour session, which is the fee for basically a base service that includes a massage and a happy ending (hand job). From there, you can negotiate for other services, including actual sex. These massage parlors are great for a more low-key experience that’s a bit more personable for the most part.

Massage parlors are all over the city, including some near Zona Rosa (the main business and tourist area), so you don’t need to go on some crazy adventure to find one.

Located at Calle 25 #31a 47, this is one of the nicer happy ending massage parlors, with around 12 girls working at a time (and sometimes also a few shemales, if you are into that). They range anywhere from 5-9, and the hotter ones are a little more expensive. 60,000 COP gets you an hour most of the time, and you can negotiate for more (blow job or sex). The facilities are very nice, and beers are 4,000 COP. 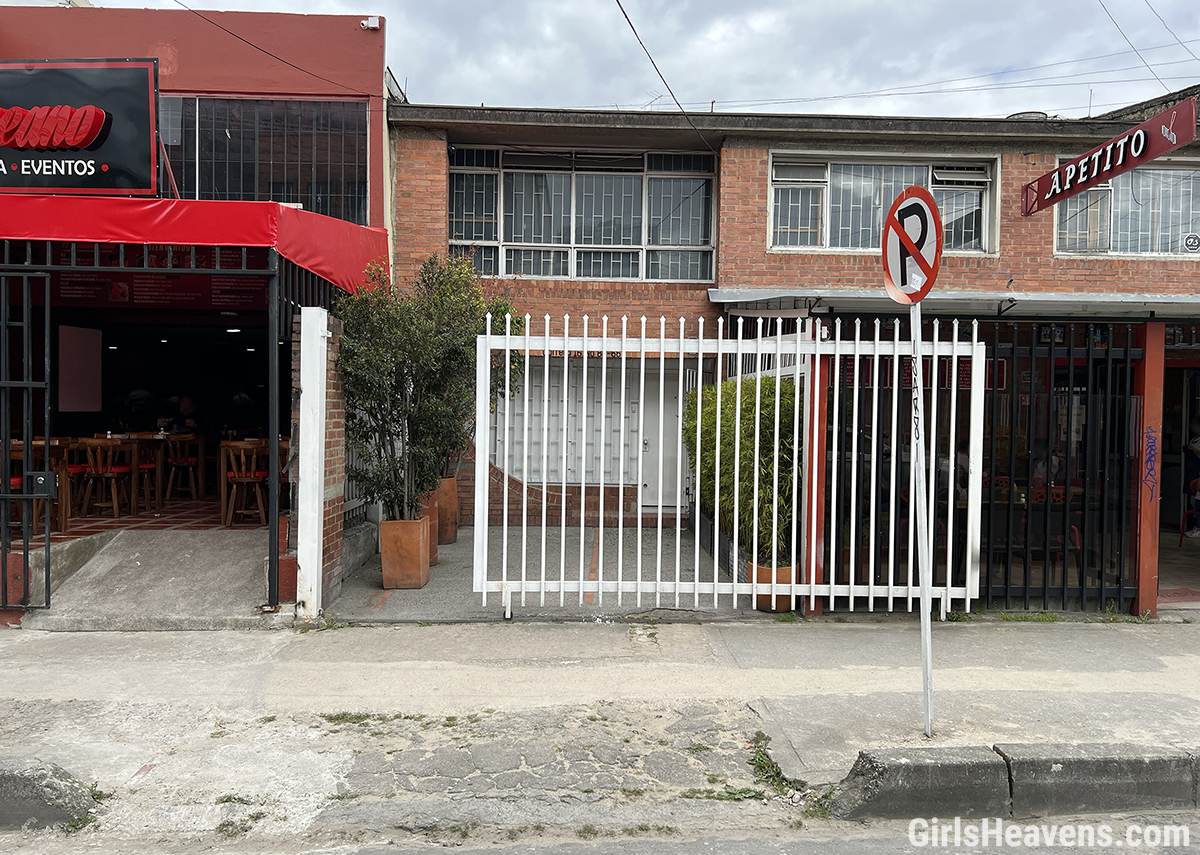 Absolut Spa is one of the biggest sex massage parlors in Bogota with about 20 hot Colombian girls to choose from. Prices are almost identical to Abejitas (see above). Notice the plants on both sides of the entrance – it’s located right in between two restaurants.

Funny name of this massage salon, and it offers a great value if you’re low on funds. The girls aren’t as high quality, but the place is still decent, and worthwhile if you’re looking to save money. There’s usually 5 girls there, and prices start at 30,000 COP for a one hour massage.

Alright, now you’re all set for some quality mongering in one of the most intriguing cities in all of Latin America. Like I said, the value here is hard to beat, and the girls have a great attitude for the most part, while still keeping things strictly business.

After a day or two of exploring these places above, you should have a good idea what you’re in for, and settle in with your favorite locations. Remember, you can always try to get a girl’s number for later if you don’t want to go through her establishment every time. Good luck, and enjoy Bogota!