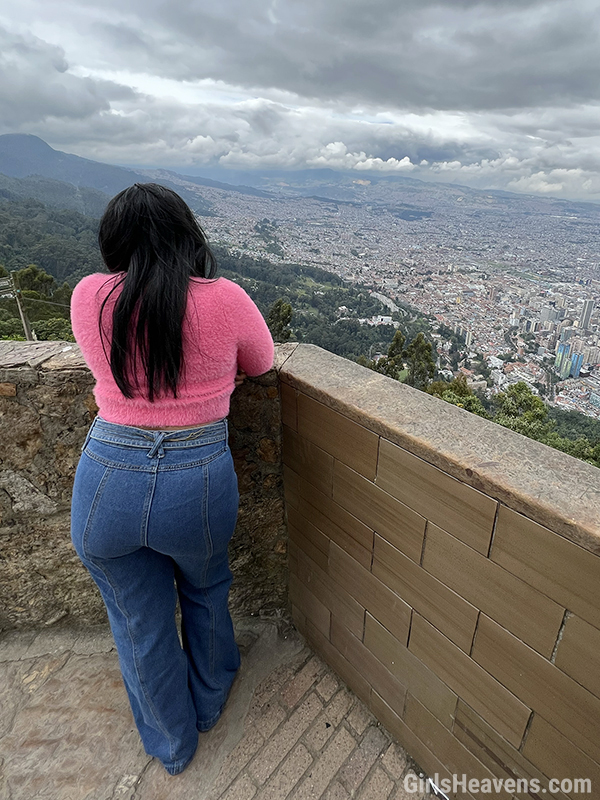 If you’re looking into countries to visit for mongering in South America, countries such as Brazil are often among the most popular. But one country is creeping up the list towards the top, and it’s one that many people don’t initially think of, perhaps for obvious reasons.

Colombia often gets a bad wrap for its fairly insane last few decades, and thanks to the success of some American sitcoms, there seems to be a renewal of that as of late. But fear not: Colombia has been on the rebound for some time, and the capital of Bogota is one of the best places to meet and sleep with hot Latin girls.

If Spanish is more of your thing, and you’re looking to avoid the typical spots like Rio de Janeiro, Bogota provides a much more low key experience that is perfectly suited for the average gringo who is adventurous and savvy. You can get by here with much of the same tactics you use at home.

Bogota is actually one big ass city. In fact, only Sao Paulo and Mexico City are larger when it comes to Latin American cities. There’s over 8 million people here, and the city is very much thriving, with plenty of nice areas to keep you occupied for the duration of your stay.

Of course, if you feel like re-enacting your favorite sitcom scene, you’re more than welcome to visit the southern parts of the city, but that’s probably not a good idea. Stick to the right areas, and you’ll meet plenty of girls for sex, and have a great overall experience in a very underrated city situated high in the mountains.

As with anywhere, there are some things you should know before you land.

I’ve already touched on it a little bit, but I’ll go a bit further. Bogota is fairly safe, and much more than it used to be. This is a bustling metropolis with plenty of busy workers, students, and business types milling about each and every day, not unlike western cities. It’s got a lot of familiar sites, including many American clothing stores and businesses.

So, if you’ve got some view in your head of a shantytown with clothes strung up in the courtyard, you’re wrong. Bogota is very hip in some parts, and full of some very hot girls who would certainly like to spend some time with a gringo.

As for meeting girls for sex, they are much more gringo friendly than places like Brazil and Argentina, but not overly so. You still might get ignored in the clubs from time to time, and the need to find your way into social circles still exists, just not as much. Bogota girls can be flaky when you’re trying to date, so you need to be persistent, and keep backup options.

Knowing Spanish isn’t crucial, but it will definitely help your cause, especially when at a club or bar. Lots of girls here do now English, but not as many as there should be. Consider doing some intensive study of basic phrases and terms a few weeks before you come. A little goes a long way.

As far as safety is concerned, use your head. Avoid sketchy areas, and don’t go out walking around after the bars close. Things get a little different after dark, and even when in nice parts of the city, the same dangers exist that you would encounter in western cities.

Also, don’t ever leave your drink unattended, and don’t let someone buy you one unless you trust them, and/or are watching the transaction.

You should also get familiar with WhatsApp, Uber, and Google Translate before you come. You’ll need all three of these frequently.

Bars in Bogota aren’t the ideal place to meet girls for sex, but you can still do it fairly easily at times. Just keep in mind that there won’t be that much going on in the city, especially from Sunday to Wednesday. Locals are much more out and about from Thursday to Saturday.

Approaching a Colombian girl in a bar can be a bit difficult if you aren’t doing the social circle game. Weekends will give you more opportunities, however. A better way to go about things is to try and use bars as part of your day gaming.

For instance, find a girl or two hanging out somewhere near a bar, and invite them to join you for drinks, with the excuse of “I don’t want to drink alone.” Things can end up going well, and you may end up with a date later that night, or the next day going on a cable car trip to the stunning viewpoint at Monserrate (first photo of the guide).

Zona Rosa is the best nightlife area in Bogota with lots of bars, and pretty much everything else as well. It’s best to get a hotel there, as you’re within walking distance of most of the places you’ll want to be visiting during your stay, and all in the best part of the city for meeting girls for sex and experiencing the nightlife.

El Irish Pub is a solid location for local girls who know they might run into a gringo. Bar la Negra is more of a club at night, but they actually have something called Gringo Tuesdays, where everything is much more western-oriented. And, as you may have guessed, Colombian girls will be there to meet gringo guys. Put that one in your calendar.

The night clubs are the supreme choice for meeting girls for sex in Bogota, and you have lots to choose from in the northern part of the city. The usual South American protocol goes at clubs in Bogota: music is loud, girls love compliments, and you should try to escalate the physical interaction if you’re getting the right vibes. Oh, and watch your drinks.

Clubs go until 3am in Bogota, and things get rolling around midnight, so make the most of your time. If you don’t have a good feeling in a certain club, just go to another one that’s likely nearby.

Theatron (pictures above) is the best club in town. It’s located on the premises of a former movie theater from the 1940s. There are 13 (!) different floors, sexy dancers from 11pm when the action really starts and even more hot Colombian ladies looking to have fun. It’s also the most popular party spot in the LGBT scene in Bogota. Seriously, Theatron is an institution you don’t want to miss when going out at night in Bogota, just watch my video from that place down below and you’ll see why. The admission fee is 50k including a 20k drink allowance.

It’s impossible to visit Bogota as a single man and not get tempted to visit the infamous Santa Fe red light district.

This is basically about a dozen of blocks with one brothel after another where hot ladies with amazing bodies and asses stand outside, lightly dressed (in spite of the cool temperatures) and ready at any time to lead you inside to one of the private rooms for a naughty sex session, which will only cost you around 50,000 COP. Yes, you read it right, and this price includes the room as well.

It’s probably best to stay at the famous Hotel Tequendama, which is only 10 minutes walk away from the brothels of Santa Fe, and that way you won’t have to take a taxi or Uber, which may feel uncomfortable or awkward for both you and the driver.

Massage parlors in Bogota are quite prevalent, and generally offer a good deal for the money. The sizes and amount of girls vary greatly across the city, but you are best off with going to a parlor with more than 5 chicas (see below). The prices also vary depending on the location, but everything generally falls below 100,000 COP (full service).

Tantra Spa (picture) is fairly popular and one of the longest established sex massage parlors. Absolut Spa is one of the bigger massage parlors, and usually has around 20 chicas on hand, and prices under 80,000 COP. One Relax Center has a hilarious name, and slightly cheaper prices. Look around, ask around.

When all else fails, you can definitely call an escort, and get a very hot girl for a very affordable price. Escorts can be found everywhere from online, to brothels, to sex clubs and strips clubs around the city.

Sex clubs such as Paisas Club and Pussy House (see the location on the map below) are great places to meet up with an escort. Paisas Club has 30-40 girls on hand during the weekends, and the place is very nice, clean, and accommodating. They are set up as strip clubs, but the girls there don’t do much performing until the weekends. A full session including sex will set you back around 90,000 COP.

There are plenty of agencies you can use as well, and Solita Spara Ti is one of the best. Every girl is legitimate, and there’s even a Twitter page they run that lists the girls available that particular day. All you need to do is message them, they’ll set it up, and come right to where you’re staying. You’ll pay more for that comfort though, around 250,000 COP.

If you want to meet girls in Bogota that are both super attractive and fun to hang out with, using a dating site is probably your best option. Seeking Arrangement is a hugely popular dating site both among expats in the country as well as tourists who want to meet up with nice local ladies.

Note: There is a decent chance that you’ll have some slight altitude sickness when you first arrive, so you may want to hold off on planning any meet ups when you first get to Bogota.

Bogota is a great city for lots of reasons, and there are plenty of ways to hook up with the girls for sex here. You have a slightly better advantage here when you’re a gringo than you would in other cities, and it doesn’t take long to get the hang of things. With just a little bit of planning, and some common sense and manners, you can have a very “successful” trip each and every time you visit.

Map of Places to Meet Girls in Bogota

Video of Girls in Bogota