My First Time Sex With A Indonesian Ladyboy

When I look back at what happened during the past 3 weeks, I still can barely believe it. I just got home from my first trip to Bali, and I’d like to share this story with you guys. I’m 47 years old, decent looking, divorced. It wasn’t my first time in Asia – I had already been to Thailand twice, but never even considered the possibility to do what I did there in Bali. Or maybe it was just the missing opportunity? Possibly.

So here it goes. I had arrived at my hotel in a relatively quiet back street of Jalan Legian in Kuta, which is, in case you don’t know it, the prime nightlife strip of the island.

The first couple of days and nights went by pretty normal, I took it easy during the daytime by relaxing at the beach and strolling through the Beach Walk Shopping Center and also in the nighttime I didn’t do anything much exciting, I just had a few drinks in the bars, did some people watching and went on a few walks to check out the red light action.

Strangely, there wasn’t much of a girly bar scene – nothing compared to Nana, Pattaya or Phuket in Thailand. I didn’t see any hostess bars at all (I only found them after reading the guide on GH actually) and the only hookers I spotted were freelancers on the streets (“massage, mister!”) and the ladies in the night clubs, especially Sky Garden.

I didn’t do anything with them though as they had horrendous price expectations – no one was willing to go for short time for less than 1 million! Ridiculous.

So my frustration was quite big on my fifth night in Bali, when I was on my usual exploration walk around the area. And then it happened: In one of the side streets of Jalan Legian I saw about five hot chicks standing in front of their shop, which turned out to be a massage salon. Oh, just another place where they try to scam you with their “sexy massage” offers, I thought to myself.

But as I came closer, it turned out that it wasn’t just another typical massage salon with average looking women – those masseuses were hot, incredibly hot. One of them walked close up to me and offered me a body massage for “only eighty thousand” with a confident smile. I looked at her body and almost couldn’t believe it: Big tits, white skin, firm butt, dark eyes, juicy lips, long black hair – and she was petite, about 1.50m.

My dick thought the same and got hard the moment she looked at me (well, probably even before that). And it didn’t even matter to me that she was obviously a ladyboy (I did the finger trick to confirm my assumption).

I almost reflexively turned down her massage offer as I had done so many times before, but then I stood still and thought for a moment. I hadn’t touched any of my daily “entertainment budget” so far due to the lack of reasonable offers. Now I had this incredibly sexy chick in front of me, so why not just give it a try? It was probably just a massage with hand job happy ending anyway, so why not try it out once. You never try, you never know.

So I looked at her, smiled and said: “Okay”.

She got excited and let me inside.

Just as I had taken off all my clothes and was about to grab the towel she suddenly came back in, holding a small basket with oil and tissues, and looked at my naked body and dick, that got even harder in that moment. She put the basket on the bed, walked right up to me, touched my stomach with her hands, while circulating and moving slowly down. She breathed in my ear and whispered “hand job okay?”.

We had a small discussion on the price, she asked for 700k first, but I got it down to 400k (including the price for the “massage” that never actually happened), and then she put plenty of oil on my dick and rubbed it up and down – while standing right there. It felt so good, she was moaning and not shy at all considering our neighbors. I could barely hold it for three minutes, and shot off my load with my one hand on her perfect ass, the other on the massage bed and my eyes alternating between her big boobs and her passionate face.

That night I could barely sleep – I constantly thought of that experience in the massage salon. It was one of the best hand jobs I ever got, and imagined how it would be if we actually had sex. 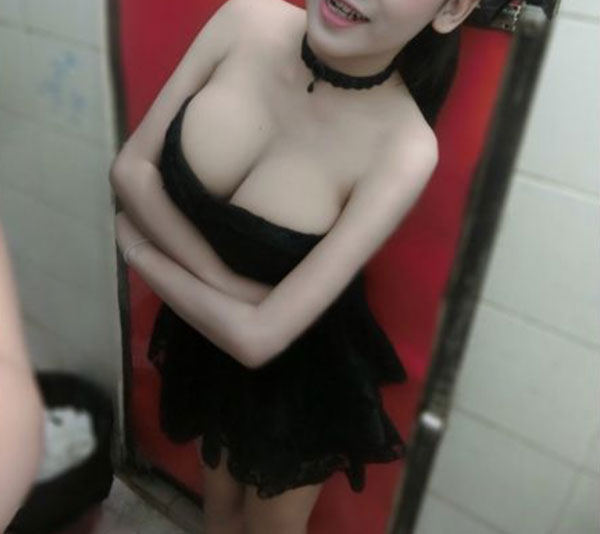 I went back to her salon the next day, and when she saw me, her smile was even bigger. Funnily, we didn’t even say anything other than “hi” before walking straight inside – we both knew what would happen. And she didn’t even try to negotiate a price when I pulled down her black dress to uncover her big tits. I sucked them like a small baby, while she had her hand on my pants, and shortly after she pulled them down as well.

And then it was my turn and time for the sex. I took out a condom from my bag in the pants (I usually prefer to use my own due to size and safety issues) pulled it over my penis and started banging her doggy-style. My hands on her wonderful ass first, and then leaning forward to grab her bouncing melons. And you know what, even though I had pictured all sorts of different positions I wanted to try with her – I couldn’t hold it for very long, she was just so hot.

I gave her the same amount like the day before (400k) which she was happy with, we kissed us and I left.

And again, I couldn’t stop thinking about that sexual experience with that cute ladyboy – I wanted to repeat it. But instead of going back to that same salon and paying more cash, I tried out the dating site route.

From what I had read on most “guys websites” like this one, My Ladyboy Date is the biggest site in Indonesia to meet up with shemales who don’t ask for money (= no hookers). So I signed up on there and browsed through the members – there were lots of pretty hot chicks on that site, I contacted a few, and it didn’t take long until I was in a conversation with someone originally from Sumatra who worked in a restaurant up in Seminyak.

We arranged a dinner near my hotel in Kuta, which went well, very well actually, we had a nice talk, and the chemistry was great from the beginning. She had a nice sense of humor, seemed to be genuinely interested in me, and well, she was well equipped under her white shirt as well, that was obvious.

I invited her to my hotel after dinner, to “hang out” for a while and to watch a movie (the standard tactic) and she agreed. One hour later I had my second sex with an Indonesian ladyboy, and the third orgasm in 3 days. I’m actually still in contact with her, and already planning my next trip to Bali later this year.

Now please don’t think I’m gay because I had sex with these ladyboys. That trip to Bali has just opened my eyes – ladyboys are the third gender, and they cannot only be really attractive and sexy, but also fun to spend time with. Well yeah, I guess they do “know what a guy thinks and likes”.