Mexico has always been a prime destination for mongering thanks to its large selection of cities to visit. You can find everything here, whether it’s the craziness over in Tijuana, in resort towns like Cancun, or urban metropolises like Mexico City.

For whatever reason, Monterrey maintains a low profile not only in the tourism realm, but mongering as well.

I guess it’s understandable. Monterrey is a huge city, but there’s just so many other places in Mexico that get attention, some are bound to get lost in the shuffle. Also, it’s not near the ocean.

Monterrey is actually the third largest city in Mexico, and is the capital of the state of Nuevo León. It has a very young feel to it, and depending on who you ask, or what metrics they are using, it’s also the richest town in the country.

More importantly, it’s arguably the Mexican city that has the hottest girls.

There are plenty who swear by this, and they’re not wrong. I don’t know if it’s the strong university presence, or just the city in general, but the girls here are hot as hell. It’s just how things go.

Things are a bit different here in terms of the mongering scene, whether you’re paying or not, so I suppose I should get to all that.

What You Need to Know Beforehand

Monterrey has gotten a bad rap over the last few years, and that’s very unfortunate. What was once considered the safest city in the country went through some pretty bad stuff a few years ago, as the rival drug gangs fought with each other, which ended up spilling over into the public a few times as well.

This brought about a period where people were a little scared, and a little more subdued around the city. Thankfully, things have calmed down since then, and it’s been rather smooth sailing the last few years, which is great. So if you’re worried about all that, don’t be.

Yes, as with any city, there are bad areas here, but you’re not going to be visiting those all that much in the first place. There are plenty of opportunities elsewhere. Just use your head, avoid bad areas, don’t make yourself a target, and you’re good.

As for the girls? They are hotter, but they are also a little more closed off, while also somehow being more forward and independent than in other regions. It’s really kind of odd, but cool at the same time. If you’ve got the gringo thing working for you, you’re in a better position.

As with the rest of Mexico, you should probably study up on your Spanish before coming if you want to improve your “regular” prospects. Also, remember to be complementary in bars and clubs, and realize you’ll often need to approach more than one girl at each place.

Monterrey is cool and cultured, and actually has a pretty good nightlife scene, much of it with some strong western and European influence, and that’s a good thing. Most of the best places tend to fall around Barrio Antiguo, a hip bohemian area downtown. The San Pedro neighborhood nearby is picking up, but Barrio Antiguo is still where to be right now.

It’s easy to just head over to Barrio Antiguo and make your way around the establishments, as most of them are fairly close to each other. Be prepared to pay a cover at some of the nicer places, however. They usually aren’t too bad though.

Topaz Deluxe is one of the most beloved bars around here, and it’s always got a great mix of people, especially on the weekends. The vibes are good, the bar is nice, the people are friendly – everything you need for a successful night out. Expect to meet plenty of young and hot Monterrey girls here for sure.

Cafe Iguana is just down the street, and one of the larger bars and clubs you’ll see in the area. It’s mostly rock-oriented, which is good if you’re kind of over the electronic scene. There’s actually multiple bars here, each with different music. Again, a very popular place. 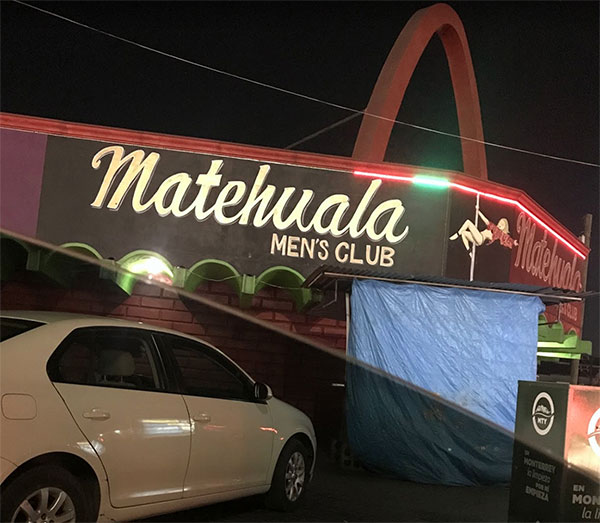 The Monterrey strip club scene is pretty wild. And as with most Mexican strip clubs, they operate as brothels as well, with many places having VIP rooms where you can have sex instead of having to leave and get a hotel room (which can still be a good option).

There are a lot of places you can choose from, that span the scale in terms of how nice they are. Oddly enough, some of the more drab places have some of the hottest girls. For the most part, you can go to the club, watch a girl dance, call her over and ask for a privado and take her to a VIP room, or take her to a hotel.

Matehuala is one of the most popular strip clubs in the city, and actually has a pretty good value for the most part, with a good selection of hot girls each night. Privados are 60 Pesos per 4 minutes (900 Pesos per hour). Rooms cost 500 Pesos an hour and you have a couch, a chair, and also a bathroom. Most of the girls charge around 1,000 Pesos, so the total for full sex will be about 1,500 Pesos. Comparable to an escort cost, but at least here, you can view the inventory first and make your pick.

Amnesia is another renowned strip club/brothel, but it’s considered very high end, which means you’re paying high end prices. Some won’t mind though, as the girl selection is incredible.

Harem is another popular place as well, and many argue they have the most attractive girls at any given point during the year.

Happy ending massages are all over Monterrey, but like other Mexican cities, most of them sort of come and go, with only a few remaining open for years on end as an established location. They usually have a pretty good value, and hey, you even get a decent massage as well.

Terapias Osiris is known for offering full sex massages for 500 Pesos, though the sessions are maybe 30 minutes total. Still, lots of hot girls working there. Their galleries are on a Dropbox link, which is actually pretty funny.

Another solid option is Seduccion Spa. Prices are about the same as above, and you can also view the girls on the site beforehand.

Escort girls are often the most convenient place when you don’t want to go out and deal with the whole club scene, strip clubs, or any of that other stuff. Just a simple outcall and you’re all set. Plus, Mexican escorts are always incredibly hot, and most of them prefer servicing foreign men, so it’s a win-win.

Escorting is big in Mexico, and in a city as big as Monterrey, there are lots to choose from. Prices tend to hover around 1,000 to 1,500 Pesos, depending on the girl, and any extras besides the sex. Regio and Luce Azulez are well liked around here.

Things are changing a bit now though, as many escorts are now using social media to contact clients. Two very popular Monterrey escort girls are Regy Ayalha and Brisleth, both of which have great reviews, and are networked with a bunch of other similar escort girls as well.

Monterrey Girls on the Dating Site

If you want to meet girls in Monterrey that are both super attractive and fun to hang out with, using a dating site is probably your best option. Seeking Arrangement is a hugely popular dating site both among expats in the country as well as tourists who want to meet up with nice local ladies.

Monterey is a bit different from the rest of the Mexico mongering scene, but like most anywhere else, you just need to know what you’re doing. I’ve covered all the options, so you have no excuse when you go. I highly recommend this beautiful city and its women, especially if you’re worn out with the usual Mexico scene.

Map of Places to Meet Girls in Monterrey