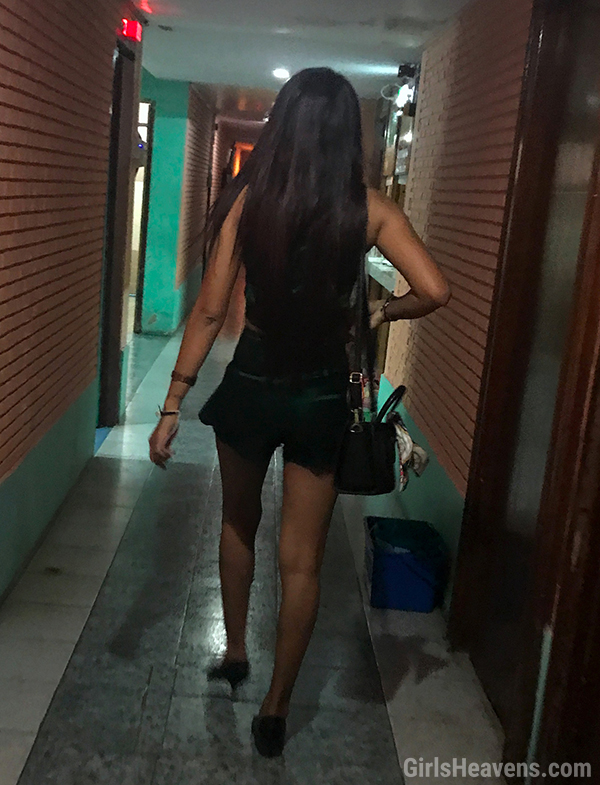 Ask any two guys who have been to the Dominican Republic about where the best place to spend your time is, and you’ll likely get two different answers: Sosua and Boca Chica. Sosua is obvious, but the more adventurous person often prefers Boca Chica, especially if spending some quality beach time is high up on the list next to meeting girls.

It’s true, Boca Chica is a bit rougher around the edges than some other parts of the Dominican, but that’s not necessarily a bad thing, especially if you’re a little more savvy when it comes to international travel – and hopefully with your Spanish as well.

Anyway, if you’re going to Boca Chica, you’re going to put some extra attention on where you’ll be staying at during your trip. Like most cities and beach towns in Spanish-speaking countries, you aren’t always guaranteed the freedom to bring girls back to your hotel room in the Dominican, although Boca Chica may very well be the most lax out of all the popular sex destinations here.

Still, it helps to know beforehand where you can have the peace of mind when it comes to bringing a girl to your room, and avoid the dreaded red light from the front desk or security guard. Anyone who’s experienced knows how much this sucks, especially when you can’t really do much about it if it’s late at night.

So, here are 5 of the best chica-friendly hotels in Boca Chica. You’ll notice there aren’t any typical resorts on this list, as they are almost always guaranteed to have a guest policy, so I won’t mess with those. These are all standard hotels, which vary in location and price.

How I Chose These Hotels

Boca Chica is a little different from some other places in the DR, but the criteria for hotels remains mostly the same. Here are the 4 things I pay close attention to before putting them on my list.

Girl-Friendly – This goes without saying. You can be assured that these 5 spots won’t block you and send your lady back the other way. Not only that, but you can also expect little to no hassle at all regarding this. Some may make you copy her info down at the door, but that’s about as far as it goes.

Location – Boca Chica is fairly condensed as far as where all the action is (Calle Duarte is the mongering hotspot), so getting an ideal location is a bit easier than other places. Still, some spots are better than others. Each of these hotels is either right up on the beach, or a short walk from it, along with having close proximities to the bars, restaurants, shops and ladies of Duarte Street.

Amenities – We all appreciate having some basic and added luxuries in our hotels, right? You won’t be getting anything overly impressive in Boca Chica when off a resort, but my picks do have all the basics, plus maybe a few extras.

Value – One of the best parts about the Dominican is the price, and that’s even more true in Boca Chica. Not only can you get some great prices on the women here, but accommodations are extremely cheap for the most part too. When judging value in terms of hotels here, I look for a combination of the above in relation to the price per night, not necessarily what’s cheapest. 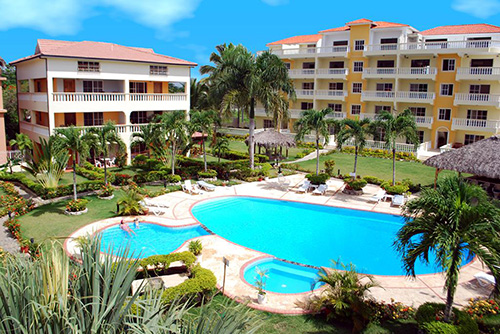 A favorite among fellow mongers (and the one I usually stay at myself), the Las Palmeras Hotel is one of the more popular oceanfront sites you’ll come across. For a relatively low price, you can have quick beach access, clean rooms, and some choice amenities you don’t always get elsewhere here.

Las Palmeras Hotel is right up by the ocean, and also very close to the epicenter of nightlife and shopping in Boca Chica (Calle Duarte). You can walk out to the beach from your room, walk back, and then make a quick walk over to all the bars and partying.

The rooms are a little outdated, but it’s fine. You get A/C, television, wifi, private bathrooms, a balcony, security deposit box, and a very good breakfast each morning. Spending a lot of time at your hotel and room is kind of dumb in Boca Chica, but the time you do spend here (especially at the beautiful pool area) won’t be bad at all. The front desk will even help arrange snorkeling trips and other touristy stuff if you need that.

Nightly rates at the Las Palmeras Hotel tend to hover around $50 per night, and maybe a little more in the peak seasons. The extra bit of money is worth it thanks to the location though, and of course zero hassles about girls. 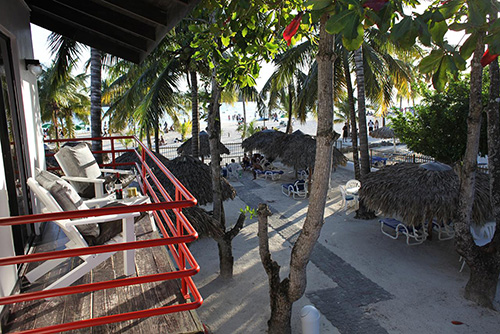 As far as non-resort hotels go in Boca Chica, Hotel Zapata is one of the nicest spots you can stay at. The entire facility is spotless, it has that vibe of a nicer hotel, the staff is kind, and there are plenty of good amenities as well. If you’ve got a bigger budget, this is the place to be.

Hotel Zapata is a beachfront hotel that has walking access to a public beach that’s always quite lovely day and night. You’re pretty much surrounded by nightlife as well, so it’s not hard to walk from the hotel to nearby bars and clubs to look for girls. It can get a little loud at night, but that’s Boca Chica, so you’re signing up for it.

The rooms are pretty nice, and you get all the standard features, plus very cool A/C, a refrigerator, and security lockers. The on-premises security is rock solid too (in a good way). There’s a restaurant and bar on the property that’s pretty good, and has an open air setting so you still get that beach feel.

One night here will run you about $65 per night, and be advised that although this is a girl-friendly hotel, you will be charged $10 for the girl if she stays the night. 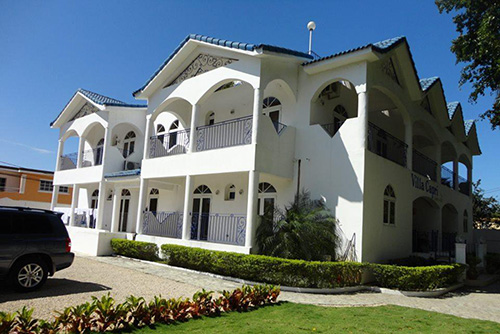 Hotel Villa Capri is one of the best values you can find on the island. It combines a nice property and decent rooms with an ideal location that’s close to everything you’ll need. The hotel is simple in the best ways, and still feels well above its price range when you’re here.

The rooms are simple and spacious for the most part, and you get basic amenities. There’s also a bar onsite, a snack bar, and you get free wifi that actually works most of the time, which is not so common here. You can also relax on the hotel’s terrace, or visit the spa on the premises.

Most of the time, you’ll only have to pay about $40 per night, so this is a great place to save money, get a beachfront view, and still stay in a nicer hotel. 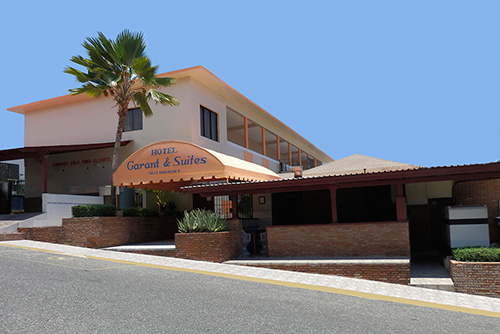 The Hotel Garant is another example of a great no-frills hotel with a prime location, friendly staff, and of course a very low price. Stay here a few nights and you’ll see why it’s a favorite among frequent sex tourists in the DR, and you’ll probably end up befriending some as well.

The Garant is about 150 meters away from Boca Chica beach, which is about a 2 minute walk down the sidewalk. The beach area is also nearby to plenty of bars, clubs and restaurants, so you’ll have no trouble finding things to do, or women to chat up.

The rooms are very clean and simple, but do have refrigerators, new flat screen TVs, and most of them have air conditioners. Those that don’t have surprisingly good fans that work very well and help make things a lot more comfortable. There’s also a pool and billiard tables for those of you into that.

Most rooms at the Garant can be had for $55 a night, and slightly more for larger rooms with A/C. 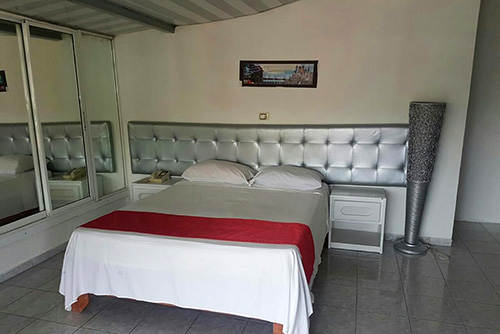 Looking for a cheap beachfront hotel that’s also near a bunch of street girls? The Costa Linda is probably your best bet. You have easy beach access day and night, and also immediate access to a shit ton of working girls that patrol the beach and surrounding area looking for a client.

That’s not to say the Costa Linda is a crappy place to just crash and have sex at the end of the night, it’s actually fairly nice for its price. It has the obvious beach access, but it’s also nearby to all the partying locations – which isn’t really hard to do in a town this small.

The rooms are basic and a little small as you’d expect, but you still get wifi, a balcony, television and A/C. The free breakfast is a nice bonus too, and you can upgrade to nicer rooms for like $3-5 more. Again, great value.

$40 per night is the usual rate here, and that’s a steal, especially considering you’re already waist-deep in willing Boca Chica girls right outside your door, literally.